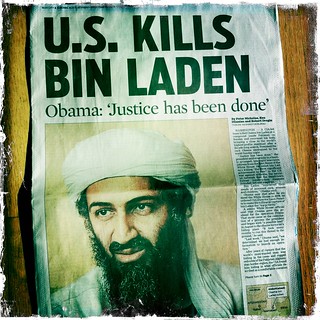 I’m quite late in responding to the issue of a Christian response to the death of Osama bin Laden. Much has been said on the topic and I had not intended to add to the commentary. However, while listening to the recording of the recent “Unbelievable? the Conference” (1)“Unbelievable? 11 Jun 2011 – Unbelievable? the Conference – 10 June 2011” in London, I decided that this conversation was worth passing along. The entire recording (which is only a small part of the whole conference) is well worth listening to, however I wanted to highlight, in particular, the responses of the panel to the question of how Christians should react to the death of Osama.

The question starts at 48:17 in, though the answer I’m talking about starts about 53 min in (between 1/2 & 3/5th of the way in) and runs until 54:27. (2)Unfortunately, the built-in player doesn’t seem to show the time. You’d have to download the file or get it through podcast to get that. However, you can probable scan through and find the spot.

“Is anything going to change, now that Osama is dead? There’s nothing going to change . . . We [Christians] are the only ones who can take on this battle. We are the only ones that can oppose it. We are the only ones that can understand it. Where are we and what are we doing about it? No one is doing it, and that’s why shame on us that we are not in the midst of this battle. You cannot expect the Americans or the British to take on this battle. We should not assume that this group of soldiers that went in those helicopters have done much for the furtherance of irradiating radical Islam. Only we can do that. Only we can confront really what drives these people to do what they are doing. And it has been around for 1400 years, this is nothing new.”

I agree strongly with Jay on this. Radical Islam will not be defeated by armies and military strength. Christians ultimately will need to be educated on both Christianity and Islam, far better than they currently are if we have any hope of stoping the non-militaristic advance of Islam, let alone the radicals like Osama. However, if we really wanted to have an impact, I believe that if Christians were well enough equipped, we could not only stop the advance of Islam, but see many of these people come to Christ. Islam is advancing largely because Christianity has become so weak. The military and terrorist aspects just happen to be making the news headlines. Much more is happening ‘behind the scenes.’

I give a brief overview of world religions in my basic apologetics classes. I spend more time talking about Islam, as it really is the biggest one we face today. However, I will probably ramp up my own knowledge of Islam (beyond a couple graduate level classes I’ve already taken on the subject) and begin to focus more effort in educating Christians on this crucial topic. I know other apologists doing the same, but we really need the average church-goer to step-up to meet this challenge. It is around the dinner table within the friendships that average Christian families form with their Muslim neighbors where this ‘battle’ will ultimately be won; in their hearts.