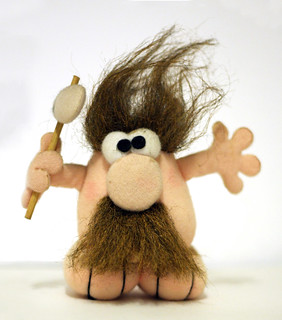 Disclaimer (1)OK, before I get too many emails. . . yes, my title was a cheap play off of the Geico ‘caveman’ commercials. And NO, I am NOT trying to imply atheists are cavemen or unintelligent, etc. However, … Continue reading

These days, it seems proselytism (2)“Proselytizing is the act of attempting to convert people to another opinion and, particularly, another religion.” from this Wikipedia article is such a touchy subject. I often hear skeptics and atheists complaining about religious people trying to convince others of their beliefs. But, is it really proselytism that is the problem, or is it the sharing of your religion (often called evangelism in Christianity) that is their concern? If we give it a moments thought – which most apparently do not – it is easy to see that it is the latter. This must see video by atheist Penn (Penn Jillette) of “Penn & Teller” shows very clearly that it isn’t proselytism, in general, that should be of concern. It should actually be expected!

I include that last example because it is probably a bit closer to what many today think about debating which religion is superior or correct (though computers are probably at least considered a more important topic to discuss). It is complex topic, therefore many don’t understand computers well enough to determine which might be better. Many think the debate is silly and that: a computer is a computer.

Worse still, a lot of people would consider it a closer analogy to religion if I had said it is like proselytizing about the clear superiority of chocolate ice cream over strawberry. They would say, that’s silly! That one is just a matter of taste! The general ignorance of religion today is so high that it is common to view religion as a matter of taste, often expressed as, “whatever works for you.”

Penn, refreshingly, understands religion well enough to get the importance of it. If you saw a truck bearing down on someone, friend or not, you’d have to hate them quite a lot, and forgo your duty to your fellow human to not let them know, if not push them out of the way! So many people can’t seem to understand this point. They criticize Christians for sharing their faith. (3)Or, is it a problem with the understanding of faith? See our articles on that subject ONE TWO. The response should be: how could a caring person NOT share their faith, especially the Christian?

The reason seems to be that people either don’t see it as important enough to be bothered with. Or, they believe it to be false information. This is like the  reaction a Green Peace advocate would likely get at the grocery store parking lot in a heavily Republican area. Some believe that trying to save the environment is pointless or detrimental (or at least have a problem with the way some environmental organizations are going about it), so they react negatively. Yet, that environmentalist knows better (or at least believes it to be the case) and takes the initiative to try and convince others of their view. Whether you agree or not, you would have to at least acknowledge their efforts are noble given their beliefs.

Now, of course, there is concern over someone being wrong in what they are proselytizing about. Sometimes that can even be dangerous. For example, people get in trouble for yelling fire in a crowded theatre if there is not a fire. People probably should get in trouble for trying to sell some medical solution which is proven to be ineffective, or worse, harmful. Yet I have seldom come across someone who is opposed to Christians proselytizing who is clear about this being the reason. Even less common is someone who opposes Christian proselytizing because they view it as harmful and can back up that assertion in a reasonable manner. It seems much more knee-jerk in my experience.

There can be inappropriate ways to proselytize. A great example might be that group of religious nuts protesting at the funerals of LGBT people. (4)No matter how you feel about their base position being correct, I’m sorry, that is simply inappropriate, and ironically, quite un-Christian. While the environment is worth being concerned about (5)For a Christian following the Bible, it has to be important. It is part of the most basic mandate given to humanity in Genesis 1:26-28. We’re supposed to multiply (properly raise families) and … Continue reading , some environmentalists have tried to share this message in ways which seem to defeat their purposes. I also have to wonder about some of the street preaching I run across, though some are convinced about doing so. There are certainly some gray areas about how to proselytize effectively and respectfully.

What is not gray though, is the hypocritical nature of most Christians, who on one hand say the Gospel message is the most important thing in the world, yet on the other, seldom share it with anyone, even their closest relationships. (6)Yes, nearly every Christian is a hypocrite on this point to some extent, as am I. Penn is absolutely right on this one! If you know something of critical importance to others, how could you NOT try to convince others of it? He is the type of atheist I wish I ran across more often. He has obviously thought through his position seriously, unlike so many today.