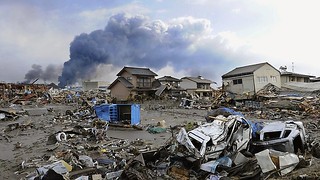 I often post when I come across articles on the Internet (1)In the future, I’ll discuss why I think this is so important. Many have said it is a waste of time, but I obviously disagree! such as the recent one in the ‘belief blog’ section of CNN. “Finding faith amid disaster,” by Jessica Ravitz on March 20th was one such article. (2)Just as an aside, my comment still has not been ‘moderated’ (Tuesday, March 22, 2011 3:59:10 PM) despite TONS of every sort of crazy comment being published. Anyone see something in it … Continue reading

While Jessica certainly rounded up some big names for comment, I feel they did a very poor job of responding. I’m posting EXACTLY what I responded with, so you can see an example, however imperfect, of what someone trained in apologetics might contribute to the typical static of Internet discussion. I’ll also post a few more comments after to expand on what I said there. We’ll be getting into a much deeper discussion on the ‘problem of evil’ in future posts. (3)I also apologize for the lack of ‘Foundations’ articles and so much ‘In the News’ stuff. Writing good ‘core’ material takes more time, which I won’t have for … Continue reading

Also, please pray for and donate money to help Japan, as well as other worthy causes! Here is a good article by World Vision on how to best help in such situations.

Natural events like an earthquake are not ‘good’ or ‘evil’ in themselves, but the way the world was designed to work (without them, there is no advanced life!). So, the real question is not ‘why did this happen?’ or ‘why did God not stop this from happening?’, but ‘why were these people not better prepared, and why did God not protect these people?’ To answer this, we need to understand the rebellion of people (everyone, not just Japan) against God, and against one-another. First, since humanity has rebelled against God, I’m not sure why humanity expects God to let them have their way, yet still protect them from every harm. Second, God has given us really great minds and capabilities to prevent much of this kind of tragedy, yet we don’t really use them to their full potential (whether due to money, or just our wants). I don’t think we should expect God to protect us from everything. We once had that kind of protection and blew it… but we will have it again one day. In the mean time, we could do a MUCH better job of using our wisdom and resources to minimize these kinds of events, if we put our money and resources in the right places rather than our own selfish ways and wants. (Note: Japan was incredibly prepared for this kind of thing compared to most people of the world, but of course, they as well, could have done better.)

So, to Sam Harris’ statement, “Either God can do nothing to stop catastrophes like this, or he doesn’t care to, or he doesn’t exist.” … Another option is that maybe God is, to some extent, letting us have our way. A few weeks ago, my little son burned his finger on a pot sitting on the stove. I suppose had I been super-dad, I could have stopped this from happening. I certainly think I exist. I also deeply care that he burned his finger. However, in my not excessively controlling him, he learned about hot pots (which I warned him about many times). I kept him from ultimate harm, while allowing some harm. If I were perfect, I could perfectly control this whole situation, so this isn’t an exact parallel, but I think might teach us something.

Yes, God has the power to control everything down the the motion of every sub-atomic particle. Yet, for some reason, He seems to allow a good amount of autonomy. On a cosmic scale, I like to think this is a form of good parenting. I’m sure that doesn’t comfort those harmed or who lost loved ones in Japan’s tragedy. However, God is looking on a bigger scale, just like I, as a dad, am looking on a much bigger scale than my son currently does about his development. This doesn’t ease the pain of these tragedies. It certainly doesn’t make everything clear (the book of Job, the best on the subject in the Bible, doesn’t give us the answer). But, I think it does give us something to ponder compared to some of the silly responses, like that of Harris.

First, my heart does break for Japan and all the people who have had their lives destroyed and who have lost loved ones. We need to pray for, commiserate with, and assist these people. There are many excellent ways to do so.

Second, I could have said things better than I did. Maybe this is an example of how not to do apologetics in some regards. However, my hope was to ‘put a stone in the shoe’ of some of the readers, especially in the light of Sam Harris’ response.

I also really want to emphasize that earthquakes and tsunamis are not evil, but natural aspects of creation. If you study the actual effects of earthquakes on the planet, you soon realize that they are quite beneficial and necessary. We couldn’t live here without them! We also happen to be living at a time in the history of the planet where earthquakes are minimal.

What is evil is the damage we humans experience and the suffering, when we could have enjoyed God’s perfect protection, had we not decided to go it on our own and throw off God’s care. What is also evil is that we could do so much better than we do to protect ourselves and loved ones, but fail to do so for financial or selfish reasons. (4)Buildings and infrastructure could be much better constructed to minimize damage, and humans could choose not to build in places so susceptible to such catastrophes. (Note: Japan was incredibly prepared for such an event compared to just about everyone else in the world.) While in a fallen world, we can’t prevent these kinds of events or perfectly protect ourselves as God could, we can certainly minimize the damage and loss of human life if we keep proper priorities. Japan is actually a great testimony to this, even if it isn’t so obvious at the moment. The damage and loss of life could have been FAR greater!

Sam Harris closes his response with an interesting comment: “It is time to grow up and let our hearts break at moments like this.” There are a couple of problems here. First, does Sam not think the ‘hearts’ of Christians (or other religions) break as well? Second, is he speaking of ‘heart’ in the physical sense, in which case it doesn’t break, or in the metaphorical sense, which his own worldview precludes? Worldviews matter Sam!

Stay tuned for a much deeper discussion of the various aspects surrounding the ‘problem of evil’ in the months to come. While Christians certainly don’t have all the answers, I think we have better ones than other worldviews (remember, the atheist needs to give an answer as well). These types of events are times when Christians really need to step up with both Christian living (helping our neighbor) as well as using the teaching opportunities to make the Christian worldview more clear (and expose the holes in other worldviews).