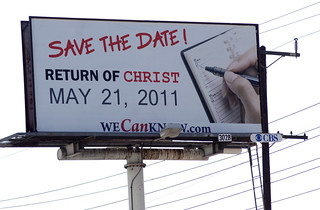 In just under 24 hours, we’ll know if this billboard is correct (I might check in early with some of my Australian friends). As I think it was TurretinFan who Twitter’d the other day, nothing says ‘thief in the night’ like world-wide bulletin boards and advertising, huh?

Having listened to Dr. White’s “Dividing Line” podcast for years, I was familiar with Harold Camping (FamilyRadio.com) and the May 21st 2011 ‘world end’ for quite some time. I figured it was mostly a debate between a fringe group led by a false prophet (note that he was wrong in 1994 . . . what does the Bible say about this?) and more main-stream Christianity. I did not give it much further consideration . . . until recently that is.

This story has been popping up everywhere in the media! What I thought was something very few even knew about, is now known by just about everyone. Even tech sites (which I follow, being a tech geek as well) have been ablaze today. Since it seems atheism is quite common among tech types, this has become quite the joke in these places. Take for example this Gizmodo article: http://gizmodo.com/5803766/rapture-prank

Really, a lot of people? Like, maybe, Christians? Or would that be a tiny fringe group of ‘Christians’ following a deluded man? The article isn’t very clear on this. Even if the author understands this, it is clear many of the respondents do not. (Note: I’d have been able to interject a bit of sense into the fray had Gizmodo implemented a sensible system of response, not requiring handing over my Facebook or Twitter account to them . . . but enough on the tech rant for now. I’d have been the 4th post too.)

But, why hero? Is it really difficult to prank a silly cult? It seems maybe these folks don’t understand what they are even poking fun of. I’m not sure who I feel more sorry for, Camping’s followers or all the tech-geek-atheists who think they understand the religion they are denying and poking fun of.

And this is where us apologists come in. We’ll have a lot of work to do, come Sunday, both in trying to educate any Harold Camping followers we might come across (have you ever met one?) but more importantly, the millions of people who might be talking (and joking) about this event. It does introduce yet another unique opportunity to open the discussion.

Well, since the ‘end of the world’ is approaching half-way finished (1)OK, so like 5 hours away, but we’re already to New Delhi. One would think Japan, China, Russia, or half of India would have reported something by now., I figured I should give a status update. As Dr. White reports, the prediction of Harold Camping has already been proven false. You can also keep tabs on things at: http://www.rapturefail.org/ as well as your preferred news outlet. Or, if you like, pop on over to: http://earthquake.usgs.gov/earthquakes/recenteqsww/ and keep watch for one of those big earthquakes (bigger than the Japan 9+, btw) which is supposed to be preceding all of this.

When you find people discussing this, be sure to let them know the following:

It now the 22nd of May everywhere on earth, so I guess that makes it official without a doubt, Harold Camping failed with HIS message about the end of the world, judgement day, the rapture, etc. Because of this, many non-Christians had a lot of fun poking fun of Christianity yet again (with Rapture Parties and such). Thanks Harold! We Christians have also had some fun making jokes about how silly this whole event was . . . and hopefully at least some of the non-Christians also picked up on that (so as not to implicate all Christians. I’ve seen at least a few articles in the general media point this small detail out).

God, it seems, also had a bit of fun with the occasion if I’m seeing this correctly. We lived in San Francisco for a number of years, and I’ve grown accustom to checking the USGS earthquake map (which I pointed out above). I can’t recall ever seeing a more calm day in the sense of world-wide earthquakes. Supernatural smack-down? I’ll let you decide.

In any event, I guess now us apologists will need to get back to the day-to-day correcting and informing people on what Christianity really teaches. Hopefully in the next few weeks, until this story wears off, it will be a useful tool to engage people in conversation and let them know Christianity has a tad bit more substance than wacky folks predicting the supposed rapture.

One more thing. Is it just me, or do the popular ‘rapture’ texts like Matthew 24 indicate it will be the non-believers who will be taken away? That would put a kink in the whole ‘Left Behind’ image so common among both believers and unbelievers alike. Though, just so this doesn’t get too serious, I leave you with the following: 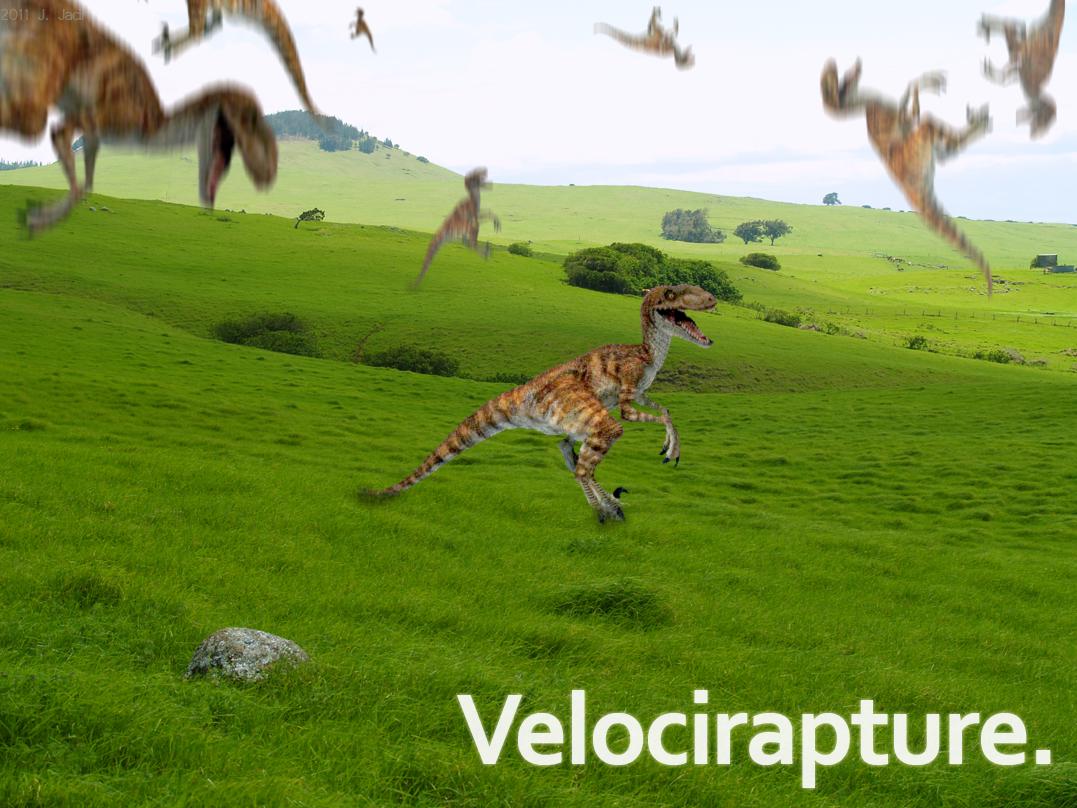 What Really Happened to the Dinosaurs?