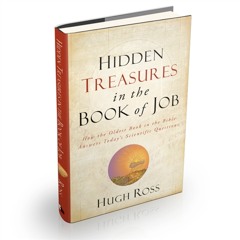 Hidden Treasures in the Book of Job is a book written by scientist, pastor, and astronomer Hugh Ross. (1)see Reasons.org While it is, in some sense, a commentary on Job, it is also a considerably different treatment than I have run across before. Most people who analyze Job immediately jump into the suffering Job experienced, God’s sovereignty, or something along those lines. While these would certainly be primary themes of Job (Ross acknowledges this (22) (2)parenthetical number references are book page numbers and spends some time on these topics), the point of this book is to ‘read between the lines’ a bit more to see what else we might discover; and discover, Ross does!

The book aims at a general audience, including Christian and non-Christian. It is written at a level which should be accessible to nearly anyone. As to what the book hopes to accomplish, Ross says, “My hope in writing is that readers will find this book’s focus on the science and creation content of Job a liberating experience in answering their questions and concerns about the Christian faith, in healing divisions within the church, and in challenging nonbelievers with evidence they’ve never yet considered.” (13) I believe Ross accomplishes this goal.

This is not going to be a typical book review, where an argument is followed through each chapter to the conclusion. I did not notice such a progression. This could be because a) there isn’t one, apart from the above overall goal, or b) that I missed it because I listened to it as an audio book (3)I had the Kindle ‘read’ the book into a MP3 file on my computer, then I put this on my iPod. It seems to be a great way to get through a book, as I’m a slow reader, but I’m … Continue reading; a first for me. What I will do instead is talk about some of the themes into which Ross groups his discoveries and investigation, and then talk about some of the discoveries I found to be most profound.

The Prologue shares Hugh’s personal story of the ordeals and suffering he and his family underwent while he was writing the book. Aside from being a nice opportunity to get to know the author a bit better, it highlights the opportunity we sometimes have to learn and grow in the midst of suffering. Hugh notes that it impressed him greatly how, “Job did not waste his suffering.” (10)

The chapters of the book seem to be the points Ross is drawing from Job, organized into categories such as: today’s issues, timeless questions, new questions, creation-day controversies, other Genesis controversies, uniqueness of humanity, the ten nepesh animals, soulish animals and lessons we can learn from them, dinosaurs, the problem of suffering, and more.

One of the big points this book makes is that parts of Job can be seen as a backdrop to Genesis and other books of the Bible. (17, 19, 33) Job was likely earlier than Genesis (in a literary sense), even though Genesis begins at an earlier event (creation). If true, this would mean that the original reader of Genesis would have been familiar with Job. (32) If we insert some of the detail we find in Job into the Genesis account of creation, we begin to clear up some of the controversies between the Young Earth, Old Earth, and Theistic Evolution views. For example, Job can help us clear up what appears to be a problem with science and the sun not being created until day four. Speaking about Job 38:4, 9, Ross says, “Darkness initially pervades the surface of the deep (Gen. 1:2) not because the sun and stars hadn’t yet been created, but rather because Earth’s primordial atmosphere was like a thick blanket that prevented light from penetrating to the surface of Earth’s waters.” (82) This is just one of a number of issues, such as death before the fall, interaction with the Young Earth view of dinosaurs, when and what plants came on what days, or the special ways in which humans differ from the animals, that Job speaks to. It is also interesting that if Job is the earliest book of the Bible, it would be the earliest mention (and a clear one at that!) of our need for a Redeemer. (40)

Speaking of animals, their discussion makes up a large portion of this book. In one section, Hugh recounts interactions he had with animals while hiking in very remote parts of British Columbia, and how their behavior differs from animals who have had interaction with fallen humanity. (135-136) Part of the point of this is to illustrate that morality is something unique to humanity. Another fascinating section involves the ten nepesh animals found in Job 38 and 39. Ross considers why these ten animals are specifically mentioned and ponders what we might learn from their importance. For example, goats are very easy to tame, and the first animals to be domesticated. While some other animals beat goats in production of various resources, goats are the best in one animal. In more recent times, goats have been used to create fire-breaks or to stop the spread of invasive plant species, as they are so effective in their cleaning of the vegetation, even in places humans would have a hard time taking machinery. (154-155) Another example is the ostrich. (159-161) Among the many interesting facts about this animal, Ross indicates the importance it would have had to early humanity (the use of it’s eggs and egg-shells), but also the importance it could have for us in the future. Ostrich meat could be produced much more cheaply than beef (half the price of our least expensive meat, turkey), but is quite nutritious and less damaging to the environment to produce than beef. Ross notes that domesticated cows produce more greenhouse gasses than the combined vehicles of the world. (65)

There are many fascinating ties pointed out between Job (and the Bible) and science in this book. While they are intriguing to me, a bit of caution should be advised. Some of the ties seem a bit speculative. By this, I mean that Ross often draws some correlation between a passage and what we are discovering in science, where the two harmonize nicely. But it isn’t always the case that one would draw this out by exegeting the passage. I don’t see this as a problem, other than considering Ross’ enthusiasm, it can sometimes seem more like the latter. An example of this would be looking at Job 38:19-20 and the discussion on the discoveries concerning dark matter. (60-63) The passage certainly does seem to treat light and darkness as things (they reside in places), but I’m not sure how if it were poetic license it would contradict the centuries old idea of darkness as absence of light (as Ross notes). It, then, wouldn’t necessarily be making a claim about reality. Another such example, which is more persuasive to me, is in how often the Bible speaks of God ‘stretching out’ the heavens and what we now know about Big-Bang cosmology. (56) This is consistently illustrated throughout Scripture and could certainly have been stated differently. It is a bit too-conveniently compatible with the science. In general, though, what Ross does is show how science and Biblical revelation are compatible, especially at the points where skeptics often attack.

I appreciate Dr. Ross taking this type of look at Job as it grounds the book in history and reality. Too many tend to take away the big themes, but consider Job a story or fable (even in circles where this isn’t explicitly stated). Because of this, they overlook a lot of what is actually there. This also invites the question of why all this extra detail is given if it is a fable only meant to convey the primary point. It would be a bit like looking at a van Gogh, and saying, “Forget all that other stuff; it is just a painting; the important point is that there are stars in the sky.”

Ross presents a great deal of research on the background of Job and the figures (Job’s friends) involved in the debate. Even considering that I am seminary educated and wrote a paper on Job in one of my Old Testament classes, much of this was new to me (I’m not sure whether this says more about my rigor as a student or the research Ross conducted, but I’m confident nearly everyone will learn something new 🙂 ). Also, gaining an understanding of the magnitude of the debate and what was at stake, one begins to understand why God accepted Satan’s challenge (something troubling to most who seriously read Job). I also appreciated the level of respect Ross paid to Job’s friends and their counsel. The background Ross provides adds dimensions to them and the book of Job as a whole. It is too easy to write them off as bad friends, incorrect on the counsel they give, and to fail to pay attention to their part of the discussion.

One of the possible shortcomings of the book (aside from endnotes; I hate endnotes; footnotes please!), may be that the book often diverges from Job to make points of the broader Reasons to Believe (RtB) model. This may turn some off who want to stick entirely to Job, or those who don’t agree with the RtB position. For everyone else, I think it enriched the book making it more helpful to both Christians and unbelievers than the subject at hand indicated when they began reading. It helps to see how everything fits together.

Another potential problem is that the book includes so many points that some of them are handled too superficially. While nearly any subject can be expanded on, given enough space, such a brief handling can leave the reader (especially the skeptic) with the idea that the point wasn’t well established. They might think that what Ross presented is all that there is to say. An example of this was the handling of ANE (Ancient Near East) cosmology parallels with Genesis. (76-78) It is often asserted that Genesis was never intended to portray real history, but instead was only a literary device written as a polemic to concepts found within ANE cosmology. This cosmology, it is said, was shared by the Israelites, so they wrote about what they knew. Ross includes a diagram and brief explanation of ANE cosmology, but then spends only about a page dealing with the supposed mention of the brass dome of ANE cosmology in Job. While the explanation is good, it barely touches the major controversy. I was left wanting a brief explanation of how Job, Genesis, and other places in Scripture support non-ANE cosmology, while still interacting with it at points. Essentially, I found myself wanting more depth at some points (knowing there was more), lest the skeptics feel they have won. I recognize the size considerations book publishers impose, but would have chosen to trim some of the other longer areas down in order to expand these points.

Overall, Hidden Treasures in the Book of Job was a very enjoyable book. It was written at a level which nearly everyone can grasp. While it left me wanting more at points, it peaked my interest for further study. It also left me feeling like I couldn’t end this review, as I have barely touched on a few of the many-dozens of points this book makes. Agree or disagree with Ross, I would highly recommend giving this book a read. It is a delightful blend of personal experience, analysis of Job, possible ties to science, and explanation of aspects of the Christian narrative and worldview.

Note: A free copy of this book was provided for review by Reasons to Believe. (4)That said, I ended up buying it on Kindle so I could listen to it, as I was finding it hard to get dedicated reading time. It is a book I want in my electronic collection anyway!